We tried it last year with Spencer Scott - a painting trip to Cuba with "Pete The Street". Unfortunately we did not get enough takers and it was cancelled.  On our holidays this summer we stayed in the Camargue in the South of France and one day I managed to rip the kids away from the campsite and into Arles.  It was absolutely stunning and sewed a seed in my head.  Liz Drake from Spencer Scott Travel got in touch on my return and asked if there was anywhere I'd like to go..
Anyway, if it runs, we are planning a 10 day trip to Arles from 2nd - 11th May 2015  (Lisa's birthday is on the 7th - oops! Sorry old girl!).
Anyway should anyone be interested here's the link:

It was at about this time last year that I was painting the big sunset painting for the Bath show.  I was doing it in the studio on the floor throwing puddles of paint and glaze medium all over it.  Not used to painting in the studio the fumes built up and Lisa kept telling me to open windows and get out.  I noticed it for a week or two afterwards feeling a bit 'icky' and put it down to the nasty 'Cobalt driers' in the glaze medium.  Well they've changed the formula now - no more Cobalt Driers and it works exactly the same!   Its yellowish in colour now as opposed to that red.  Good job Robersons - we ca all live a little longer!  Great to see some autumn weather at last.  I can now wear my long johns without fear of having to strip at 21 degrees, sweaty on a pavement.
Posted by Peter Brown at 03:04 3 comments:

..was today at the mall galleries.  Unfortunately I missed the first one and a half hours as the M4 was closed after Slough!  We saw lots of great stuff.  If your work did not get in I am sorry but I think we did it as fairly as possible.  The exhibition opens on the 28th November and runs to the 7th December.
This is a seasonal one I'm putting in which I painted last Christmas: 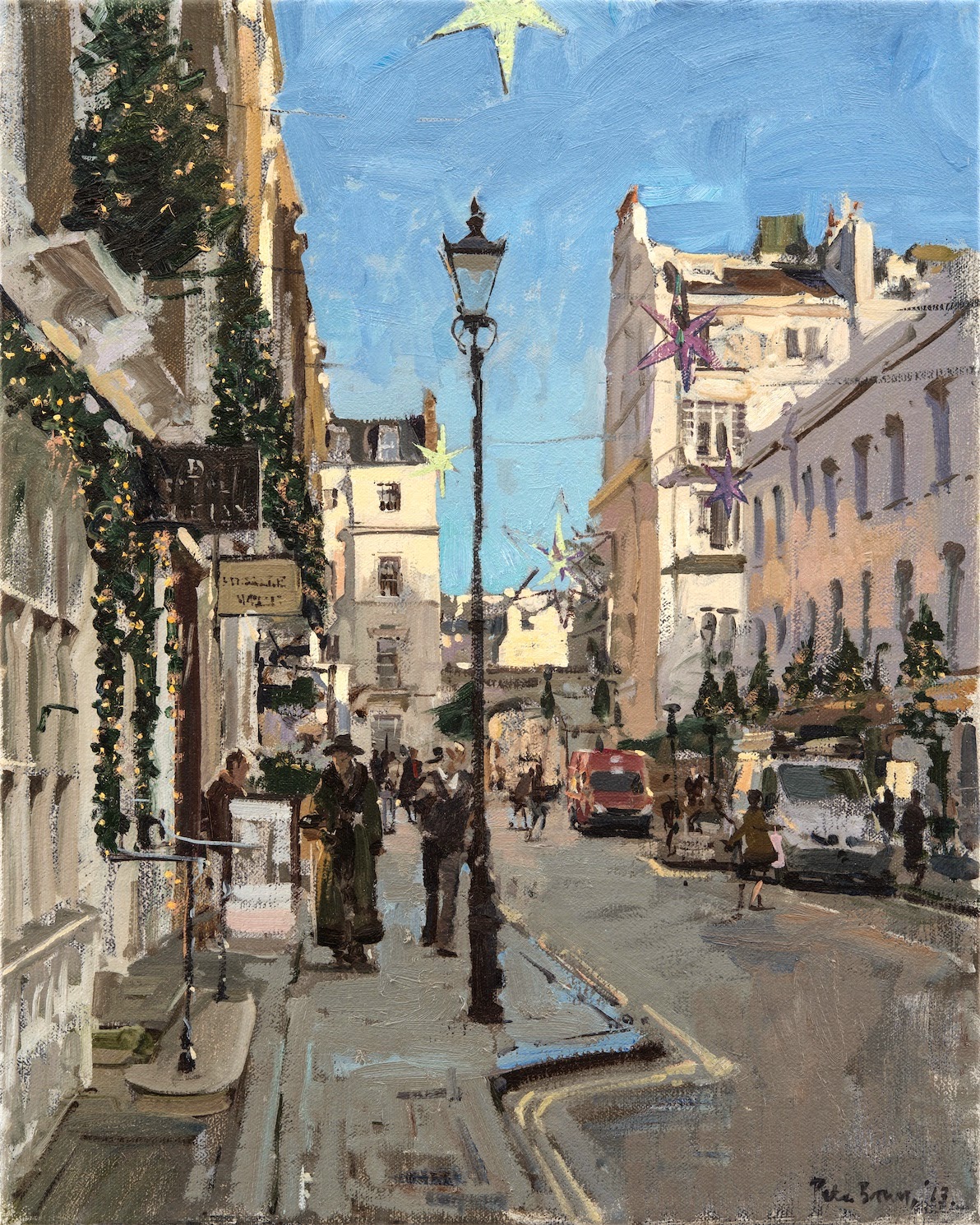 I've just finished watching the series on iplayer.   Firstly - I loved it and found it very inspiring.  So thank you Mr Graham-Dixon and the BBC:  "I would happily pay 3 times the license fee...".  What always gets me though are those niggly bits:
When Bomberg goes to Jerusalem he suddenly produces some paintings that are ... er I don't know.. 'see and put',  panoramas of the city that are clearly a response to light and an amazing space.  It's like he's overwhelmed by the beauty and can't stop himself from transcribing what he sees in a very straight forward way.  But the art historians have to make something of it that's not there.  It drives me up the wall.  You can clearly see in those paintings he simply thought it was visually inspiring and wanted to put that down.
In the same programme he looks at the charcoal drawing of St Paul's from a church spire... "probably St Bride's" .. well as you can see Fleet street on his right leading up to the West façade of Saint Paul's and St Bride's on the other side, he clearly was not.  It really gets me that.  Its like the pomp of art speak overtakes common sense and basic research.  I don't know what spire it was drawn from but it wouldn't take long to work it out.
I remember seeing a programme on Constable years ago when the historian tells us how Constable, as a young man, must have had a poor view of the heavens as he had painted the moon in front of a cloud.  But it is clearly a thin cloud that the moon's light penetrates.
Having said all that I did love the series.  Quite humbling to see that sort of self belief and obstinacy - but I guess that's what you get from really great artists.
Catalogues for my efforts should land on door mats tomorrow... I hate this bit.  Lush to still be sporting sandals and shorts though hey!
Posted by Peter Brown at 15:10 No comments:

I am currently reading (yes! Pete - reading!) a biography by Mitzi McCall about her husband's life Charles McCall (well both of their lives), .  I bought my studio easel from his estate about 10 years ago.   It was encrusted in paint and I'm adding to it.  I collected it from his wonderful studio near Sloane Square.  I was reading last night about his first one man show at the Leicester Galleries in the 1950's.  An Oliver Brown from the gallery expressed his concerns to Mitzi on the days that followed the opening that Charles would be upset by the press coverage.  Neville Wallace gave him a good illustrated write up in the Observer but Eric Newton in the Sunday Times was 'rather waspish and fitted the exhibition into a theme he was writing on other exhibits about repetition'.  … "All the other reviews were kind and there was a very pleasant one in the Daily Mail by Pierre Jeanerat."… Oh My God!  Any of us would settle for the waspish one.  Wouldn't that be amazing for critics to turn up to a show and write a criticism on it!  Imagine having to worry about 'what the critics say'.   Anyway, the paintings are being framed by the Ashleys - who are amazing and the catalogue is currently being printed. Messums have done a superb job as ever putting it together.  I know it sounds smug but I am so lucky to be promoted by such a fantastic gallery.  Everything is done so well.  It opens on 22nd October and runs until 15th November in 8 Cork Street.   It will be one of the last shows at number 8 sadly as Messums move over the road while that side is renovated. 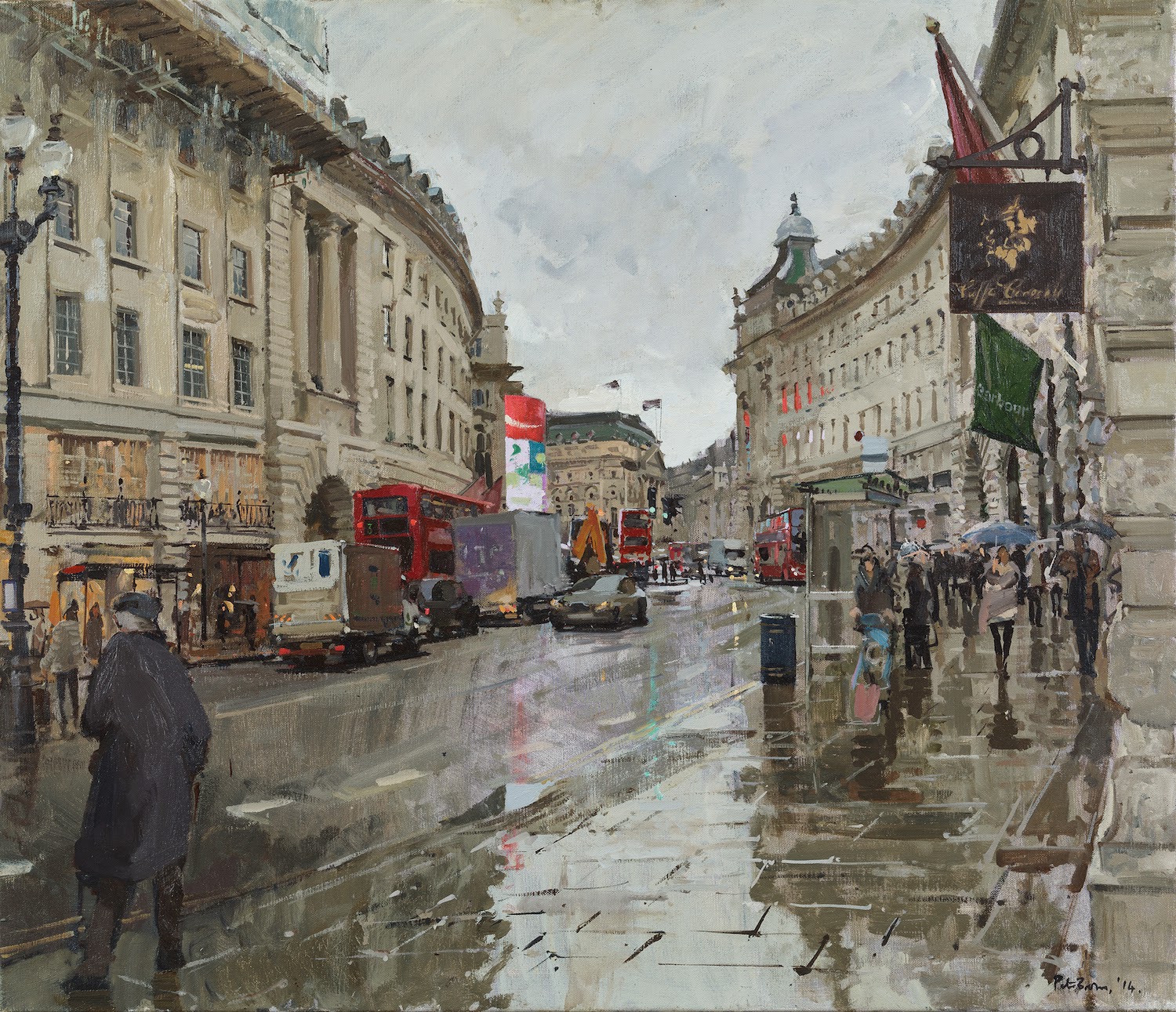 
I did the NEAC digital selection with 5 other members of the NEAC committee yesterday at The Mall.  I am not a fan of digital selection at all and would prefer we did it all looking at paintings in the flesh.  It is a cost cutting exercise (although there are benefits for those submitting too).  All the open exhibitions now do it but it puts the emphasis on 'The Image' and not oil paint.  Apparently it is a necessary evil and we erred on the side of caution selecting rather than rejecting.  We saw some really good stuff…. I think!?  Anyway good luck to anyone who submitted and if you were rejected it wasn't me. It was the others!
Posted by Peter Brown at 23:40 2 comments:

Well I've painted it enough, I reckon it's time to run it.  I am doing it to raise money for Breakthrough Cancer Research and am running with my mate Robin.  It would be great if you could support me on the virgin money giving page:
http://uk.virginmoneygiving.com/pete-the-street
Thanks chaps.
Pete
Posted by Peter Brown at 15:13 1 comment:

Just got a catalogue from my buddies Karl terry and Tony Dakin who are putting on their own show at 27 Cork Street.  The work looks great.  The show runs from 7th  to 12th October.  Website: www.tonyandkarl.com.  Check it out.
Posted by Peter Brown at 11:35 No comments:

Peter Brown
I am an artist living in Bath with my 5 kids and 1 wife. I wish I had more but Lisa says no. I paint landscapes, cityscapes, seascapes, interiors and the very rare portrait. I am 45 but look about 55.